Our taxi driver couldn’t find our hotel in Quito. He drove up one street of Old Town and down another. Then the cabby stopped in the middle of a very narrow road and Marty got out and ran down a pedestrian-only street to see if the hotel was nearby. I sat in the back seat. Cars couldn’t pass us and we were surrounded by honking. Our driver kept waving to say “just a minute” but you can guess how effective that was…

… so the taxi driver drove up and onto the sidewalk, then got out. He used hand signals to tell me to remain in the car — our luggage was in it after all, and I noticed he’d left the keys in the ignition. Then the cabby ran after Marty.

I was still in the back seat. I looked around trying to decide what to do, and realized there was nothing I could do. I locked the doors. I felt a wee tad of panic. This was not how I expected our day would go.

Earlier that day, we set our alarms for 5:45 AM Friday morning February 5th to leave Medellin. We stripped the beds, piled the towels and finished the last of the apartment cleanup. We put both sets of keys on the dining table then gathered our heavy luggage. I told the room Goodbye and expressed my gratitude. (It’s a ridiculous thing to do, and Marty had a good laugh… but I’ve been doing it for more than 30 years.)

The cab ride to the airport was “uneventful” because we’ve grown accustomed to riding in the back seat of rockets that fly around other taxis, leap pedestrians and honk their way through narrow streets. We’re fearless.

Our first flight was to Panama City — the descent was gorgeous. Look at the ships in the harbor waiting to go through the Panama Canal: 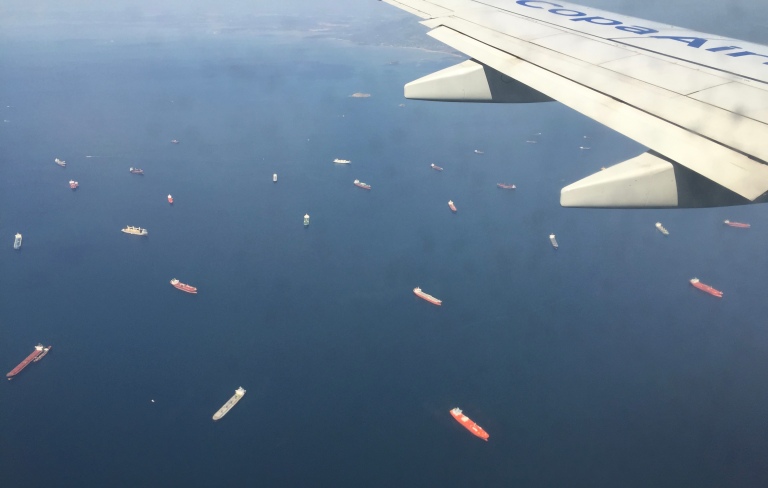 Unfortunately, the Panama flight was delayed in Medellin, and our layover was only 40 minutes. The overhead signs for our flight showed Final Call. Our gate — 8A — was on the other side of the terminal.

We gathered up the tonnage of our luggage and started fast-waddling our way toward the departure gate. Marty was in front but as he started to lag, I took the lead so I could tell Copa Air to hold the flight. We made it, wide-eyed and wheezing and crawled into the cabin. They shut the doors and the plane took off.

Two hours later we descended through the Andes Mountains into Quito.

After the cabby left me, I developed a brain-rattling headache. Ecuadorians wearing wide-brimmed hats and wool capes walked around the taxi — they had to if they planned to continue on the sidewalk. Their skin was darker than the Colombians, and their eyes had a beautiful shape — you could see their ages-ago Asian heritage. Their irises looked black.

I didn’t need to understand Spanish to tell they were curious about the gringo left alone in a cab parked illegally. I looked straight ahead. I felt… ridiculous.

Soon Marty and the driver returned — the hotel was a few blocks away but not accessible by taxi.  We unloaded our luggage and paid the driver.

La Casona de la Ronda was a former mansion built in 1738 and converted into a 22-room hotel. At check-in, the clerk gave us mugs of room-temperature coca tea. It’s a steeped mixture of coca leaves, cinnamon and “local herbs.” It looked like green tea. The mild stimulant effect alleviates the symptoms of Altitude Sickness, also known as Acute Mountain Sickness (AMS.)

AMS occurs when a person ascends to high altitudes. The physical effects of limited oxygen usually begin around 8,000 feet. We were at 9,000 feet — Quito is the highest- elevation capital city in the world. Symptoms of AMS include headache, blurry vision, difficulty breathing, extreme fatigue, mental confusion, swelling of the hands, feet and/or face. It can feel like a flu coming on.

Our room was on the third floor and Marty wheezed like he’d run a marathon after walking up three flights of stairs. There were no elevators.

After unpacking, we wandered the streets — huffing, puffing, gasping — till we found a restaurant that we thought we’d seen praised on tripadvisor.com.

While we ate we were serenaded by an Ecuadorian band. I wish I knew the name of the pipe he played:

We had an odd mix of dishes for our dinner: empanadas stuffed with baked chicken and cheese, then a Peruvian potato soup for me and a broth-based chicken soup for Marty, then a plate of chicharrón (fried pork belly) with hominy then grilled pork and beef. A bottle of agua con gas (fizzy mineral water.) Wine. The bill — with tip — came to $48. The U.S. dollar is the Ecuadorian currency.

By the time we returned to the room the AMS was getting worse. (We wouldn’t discover until later that a heavy meal is not a good idea.) We were taking deep breaths and feeling extreme fatigue. (But that could also be due to the three hours of sleep I’d gotten the night before, plus we had been traveling all day.) Within about, oh, one minute after returning to the room, I fell deeply asleep — on top of the bed covers — with my laptop half on my belly. Marty tried to wake me without success.

I woke up about 4 AM — I felt like I couldn’t get enough air. I could see the lump-under-the-sheets that was Marty in the other bed. I listened to his gasping-choking-vaguely-snotty-honking as he slept. I considered waking him, but why? He’s not getting enough oxygen… nothing could be done. I thought, I will never be able to sleep with that racket…

But then I fell right back into it and didn’t wake until 7:45 AM. I splashed filtered water from a pitcher on my face, then started writing again. I listened to Marty wheeze for an hour till he woke up about 9.

Marty ventured out to wander Old Town and I walked up a worn wooden spiral staircase and flopped on a divan in the uppermost room of the hotel. It features huge windows that look out onto a beautiful view.

I had the odd sensation that my eyes were bulging. My head throbbed. Occasionally I would find myself panting, but I was able to work for several hours anyway.

Marty returned with wonderful stories of having watched a parade with native dancers — women in huge skirts made of flowers; men who put their horses’ front legs on their shoulders then faced forward and “danced” with the horses behind them. It was Mardi Gras in Quito — we didn’t even know it. He met a Quito resident who had returned there after living in the U.S. for most of his life. The stories were amazing. I interrupted him — show me the photos!

… there are no photos. No videos. Marty couldn’t work his camera… which I will attribute to the mental fogginess of AMS.

(Note to Self: travel with someone who can take pictures…)

After we drank another few cups of coca tea (it really does help) we went out exploring Old Town.

The stucco is painted a brilliant white, like cake frosting. The details of the buildings are so elaborate — the white is blinding. It’s like walking through a city-sized wedding cake.

It’s a challenge to deal with the water. We aren’t eating salads or already peeled fruit because the water of Ecuador isn’t considered safe. The hotel provides bottled water, plus huge containers of treated water on each floor. This means a variety of techniques to prevent illness: don’t brush your teeth with water from the tap — use the treated water. When bathing, use the handheld shower and only wash your body. Use the treated water to wash your hair and face — even tightly closed eyes can get water into them. I had to do this for weeks when I was in Cambodia and Laos.

Of course I couldn’t eat that watermelon, but I was certainly tempted. It was perfect — I could smell its sweetness from 10 feet away.

AMS symptoms subside with time, or by returning to lower elevations… we were picked up by a driver at 5:30 AM Monday, February 8th to go to the airport for the flight to the Galapagos Islands, at sea level.

And that’s where we’ve been for the past week — on a ship, hiking the islands, riding these small boats made of rubber tubing and enjoying the strange world of the Galapagos. We had no internet access (more about that in an upcoming post) so I was unable to update the blog. We’re back in Quito (same hotel, same room) and I plan to get caught up with stories in the next few days.