I remember when my dad and his mother (we called her Bigo) killed and dressed out a hog in our pasture. I was six or seven years old, probably in 1967 or ’68.

They laid a metal 50 gallon oil drum on its side then lifted the opened end and set it on stacked pieces of 4×4 lumber. The cleaned drum was filled with water then a fire was built underneath it.

The dead pig was put forelegs-first into the boiling water. I can still see dad holding the back legs and pushing the hog down, pulling it forward then pushing it back down again. The boiling water loosened the coarse hairs.

The pig was pulled from the water and laid on her side. I remember Bigo on her knees and using her big butcher knife to carefully scrape the skin, like giving the pig a full-body shave. She was meticulous about everything (where my dad learned his meticulous ways… which I suppose were passed on to me) till the pig was completely smooth.

It was gutted and washed then cut into what we would recognize from the grocery store: roasts, bacon slabs, long racks of ribs, pork chops…

Home butchering has a long history, but is rarely done in the U.S. today.

In Tetouan I visited the tanneries where the hides of cattle, sheep and goats are turned into the rich leather that is crafted into handbags, luggage, shoes and so on.

It’s a process that has remained virtually unchanged for thousands of years. I felt as if I had gone back in time.

Huge containers are filled with cattle urine where the hides are initially soaked, and then they’re submerged in huge vats (some carved out of the stony ground) and filled with a mixture that includes pigeon droppings and water. They remain in the poop for upwards of three days.

The tanning process makes the leather supple so it can be easily worked and to efficiently take on the natural dyes.

What’s the first thing I noticed? The incredible overpowering stench. It’s acidic with the metallic and soured egg smell of ammonia and sulfur. The pigeon manure was super-pungent in the heat. Some of the men don’t even wear rubber boots but use their feet to massage the tanning fluid into the hides.

The leather artisans are a few blocks away. Their tiny shops (sometimes so small there’s only room for a single individual) sell items made by hand using ancient techniques.

When I return to Tetouan, I plan to visit them on my first day so they can measure my feet and make me a pair of shoes. I didn’t see their shop until three days remained of my time there. If prices haven’t changed, it will cost me 400 dirhams to have them custom-made, approximately $40 USD.

He is the fifth generation of his family to make these bags. But he is the end of the line — none of his children are interested in continuing the work. When he dies, a long tradition will go with him.

I’ve always liked the Proust quote I used above. I can become nostalgic for times like that hog butchering from my childhood. I understand when people feel a yearning for when things were “simpler” but it’s a romantic falsehood. None of us would want to return to when things were so hard to accomplish.

Is it any wonder the leather worker’s children don’t want to devote a week of their lives for the equivalent of $20?

Yes, it’s sad that our cultures — anywhere in the world — are being lost to the forward momentum of time. But it is a natural unavoidable change as we develop new and better ways to accomplish tasks.

For all the reasons the internet distracts us, it also brings together people who share an interest in making. Arguably, at no point in modern history have more contemporary people devoted their spare hours to developing the skills and talents that preserve the beauty of handmade objects. Our college has a woodworking program on the California coast that brings in artists from around the globe to teach them how to craft gorgeous furniture by hand.

My dad is 85 years old and when some of his contemporaries say “things aren’t what they used to be” he reminds them of reality. “Yes, that’s true…” he says, “like when I need light I flip a switch and when I need water I turn on the faucet. No one really wants to go back to the good old days.” 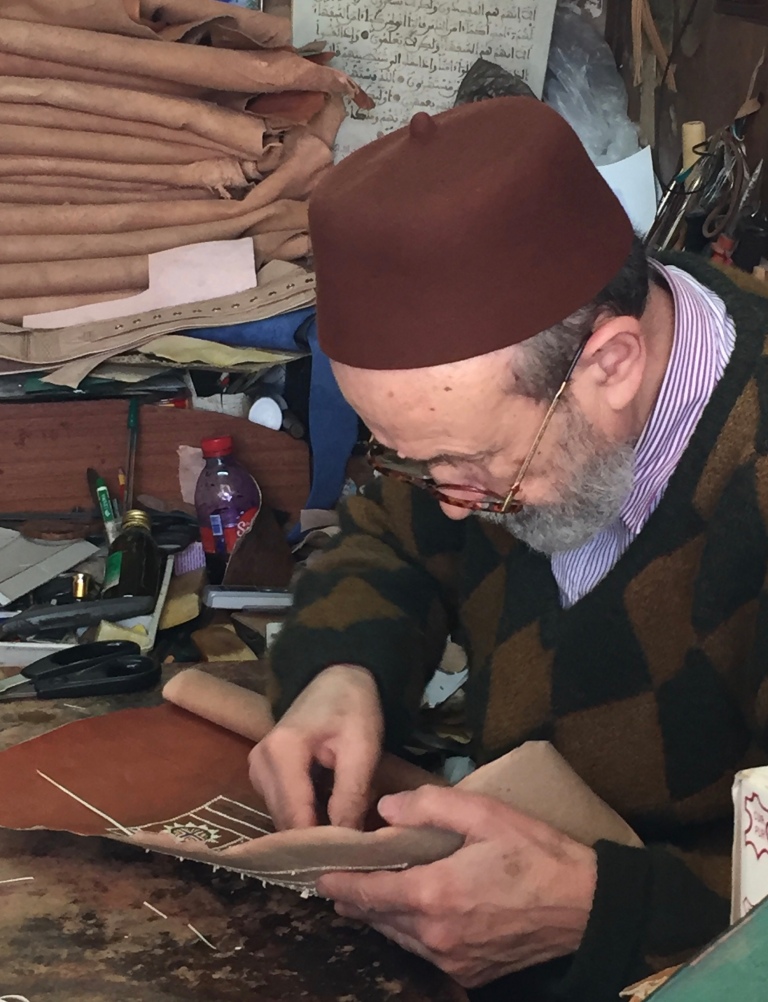 Even so, as I watched this old man’s hands move with such assurance to weave the leather into intricate patterns, I couldn’t help but feel wistful.

One thought on “Going Back in Time: the Leather Tanners of Tetouan”