I’m writing this from the “Orly Airport, Ouest” — Orly, West Terminal — just south of Paris. This was the primary hub before Charles De Gaulle International was opened in 1974. It’s much larger than the impression this photo gives. I’m on my way to Barcelona.

For the first time, I used Uber. I had heard how quickly they arrive so I was standing at the door with my cap on and the keys to the apartment on the countertop. I clicked Get Car on my iPhone.

What I didn’t realize is that I had clicked “Uber-X” — the deluxe service. (Just before that, I had clicked “Car Pool” and the service isn’t available where my apartment is located.)

By the time I’d hauled my two tons – o’ – luggage down the three flights of stairs, there was a gleaming black Mercedes waiting for me. The driver asked, “Bart?” The French say my name:  Barrrrrrt. He put my baggage in the trunk, I crawled into the backseat and off we flew.

At one point during the ride, on the freeway, the driver said, “Regardez” — look at that — and he motioned his head to the other lane. A motorcyclist had lifted his front wheel high into the air and was flying down the road at 60 MPH on his back wheel. I said, “Jaune et intrépid” — young and fearless. He drove like that for at least 10 seconds before he lowered the front wheel. I should have added, “et stupide.”

Uber-X cost me 40€, but with the 15€ credit I’d received for trying it out, it came to a cool 25€. The online taxi-fare estimator had calculated a taxi would have cost me 39€ (and I would have had to walk four blocks to get it. In Paris you go to a taxi stand, you can’t flag them down when they drive by.) Not too shabby.

I’ve been at the airport an hour, my bags are checked, my ticket is in my pocket. My flight doesn’t leave for another four and half hours. This is Old Man Behavior in the extreme. I’ve got to find a way to relax. It’s okay to arrive a little later to the airport.

When I was 23 years old — maybe 24 — I had a flight from Dallas to Houston. As my pal Karl drove up to the front of the airport, I realized I had left my wallet and airline ticket on the kitchen counter. To get an idea of how long ago this was — in terms of technology — you had to have your tickets with you, and of course I needed ID. The flight was leaving in 40 minutes — it was December 23rd — and so Karl turned the car around. My flight was out of Love Field and I lived in Oak Lawn, so the apartment was close by. Karl violated multiple traffic laws. I kept telling him — there’s no way we’re going to make this work.

When we returned to the airport it was 6:45 — the flight left at 6:30 — and I told him to wait as I ran inside. The screen showed that the flight had been delayed, and wouldn’t leave until 7:15. I ran back out and waved Karl away. I checked in and sprinted to the gate with only seconds to spare.

That experience has stayed with me. I never wanted to repeat it.

But then I did…

… when leaving Houston for San Francisco. My parents encountered bad traffic driving me to George Bush International Airport (when it was named Intercontinental) and though we arrived an hour before my flight, the post-Christmas flight rush was in full swing.

The line for Security was huge and the loudspeakers repeated “all flights are full, please check as much baggage as possible.” Once I’d cleared that, I ran toward the plane (on the other side of the terminal, of course.) I was out of shape at the time and I remember thinking: “I’m going to die.”

My breathing was hard and ragged — from exertion, the stress of the situation, and from the mental effort to figure out what I was going to do if I missed my flight.  When I finally made it to the gate and onto the plane, I was gasping — I couldn’t catch my breath. The flight attendant asked me, “Are you okay?”

I wheezed, “Do I… look like… I’m … okay?” I was covered in sweat; my facial muscles felt as if they had been twisted into knots.

Since that time I’ve never been late for a flight. In fact — like today — I’ve been so early it’s ridiculous.

And Bill? He has the same “problem.” On the day he flew back home from Paris, he was up at 4 AM and out of the house by 5:30 AM for a flight that didn’t leave until that afternoon. He was taking the train to De Gaulle which required one transfer. He texted me later to say he was there, “with four hours to spare.” Then he added, “Like an old man.”

The impulse toward punctuality is a good one. I think there’s a particular circle of hell (per Dante’s epic poem) reserved for those who are perpetually late. But there’s a distinct sort of neuroticism at work when a person is absurdly early. I don’t know if it has a name, but Bill and I have terminal cases of it.

How is the time filled? I’ve been writing. And reading. I ate Croque Monsier (a hot ham and cheese sandwich.) I’ve dragged my too-early ass through the shops and stores. I’ve had coffee.

I look around and people-watch, of course. What have I noticed about the French airport?

When I bought coffee at Starbucks, the clerk asked me my name. She repeated it correctly then wrote it on the cup. Here’s what was handed to me. 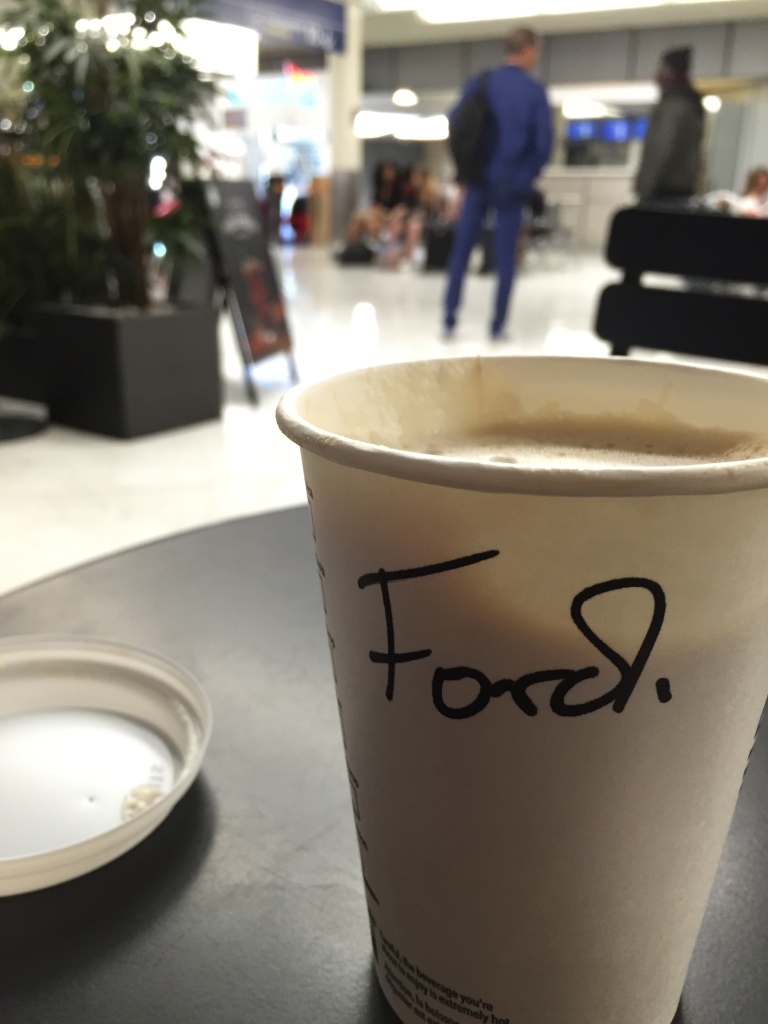 4 thoughts on “Punctuality and Neuroticism: A Few Thoughts”