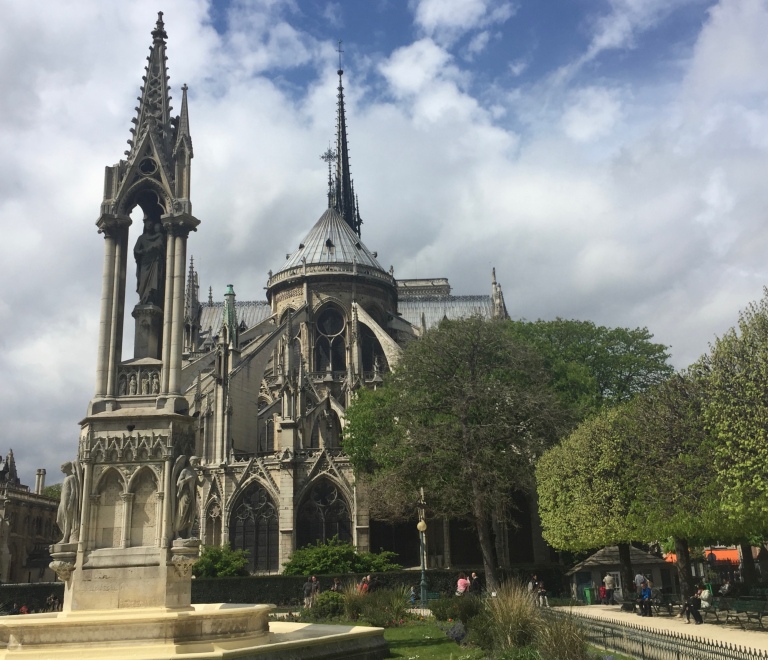 Bill and I visited one of the world’s landmarks — Notre Dame de Paris — Our Lady of Paris. We stood in line for about 45 minutes to buy tickets. I thought we were paying to go inside; in fact, we were in line to climb to the top.

Imagine my surprise when we were directed to a small slender staircase made of stone. After a few minutes, I could feel the burn in my legs as we moved ever upward. People above us were stopping to catch their breath. A young Chinese couple groaned extravagantly about their exertion to make themselves laugh.

The climb lasted nearly 10 minutes and covered 387 steps. An older couple ahead of us caused us some concern, but they were troupers and kept going.

I also climbed the additional stairs to get to the bell tower.

I’m glad I was a complete ignoramus. Oddly, it made the ascent easier because I didn’t know what was ahead. But at the top! You get to view the gargoyles and chimeras up close, and the glorious city of Paris stretches out forever.

Gargoyles are hollow and serve to direct rainwater away from a building to prevent damage to the masonry and mortar.

I’ve always liked the oddness of gargoyles and chimeras, but it’s rare to get a close-up. Some are fierce-looking; others are simply strange creatures resting their chins on their hands.

Just when I thought Paris couldn’t get any more beautiful, these views of the city blew me away. Because it was cloudy and sometimes raining, the quality of the light on the buildings seemed particularly lovely.

It’s impossible to capture the immensity of the interior. It goes on and on in many directions. Outside the view of the above photo are many naves, multiple smaller chapels, confessionals, and places to pray.

Because they only allow groups of about 15 at a time to go up those stairs, we felt as though we had plenty of room and space to enjoy looking out at the cityscapes when we were at the top of Notre Dame.

But inside? Throngs of people — so many it felt impossible to catch my breath. Signs commanded “Silence in the Church” but no one seemed to care. Every ten minutes or so, a recording would play over loudspeakers that began with the “sh-sh-sh-sh” sound and then “silence in the church” would be repeated in French, Spanish, Mandarin, English and other languages.

Construction of Notre Dame began in 1163 and wasn’t completed until 1345, 182 years later. The people who originally conceived of the cathedral didn’t see the final building. I imagined the thousands of workers and craftspeople who worked their whole lives on Notre Dame and yet never saw it completed.

As I toured the cathedral and enjoyed the views, I kept thinking about the actual execution of ideas — how long it takes, what is required, the day-to-day process of moving from the original thought to the final product. I felt overwhelmed by the majesty and scale of it, as if I was drowning in sensations.

And I thought of the millions of people who had been coming to this cathedral for hundreds and hundreds of years. You could see the end results — smooth indentions had been worn into the stone steps by their feet.

5 thoughts on “From the Top of Notre Dame: Panoramic Views of Paris”