The concept of “roughing it” is subjective. Our accommodations were beautifully constructed, using local trees. The roofs are made from palms with huge thick leaves. 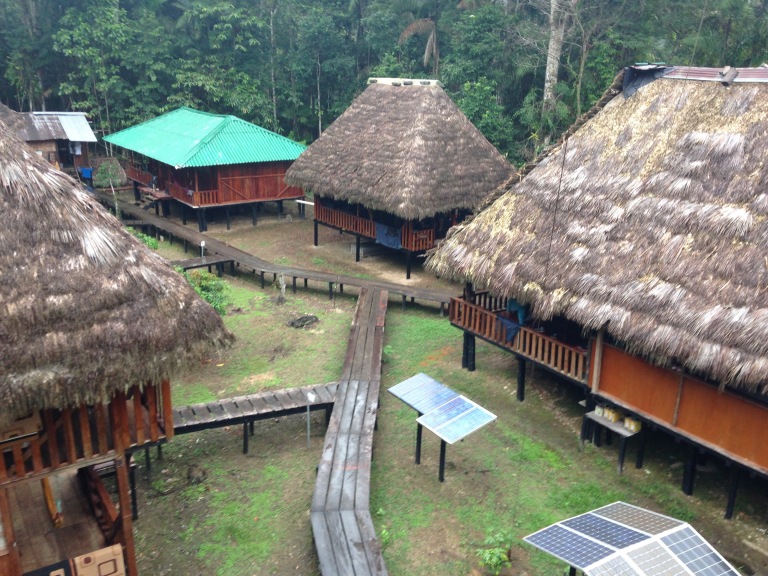 You can see the solar panels. Due to the limited electricity they produced, the power was shut off to the cabins during the day. They would be turned on (a single light bulb) in the huts from 6 PM till about 9 PM, when they would be shut off (usually without warning.) We used flashlights — and flashlight apps on our phones — to move around the cabin or go to the bathroom during the night.

Large mosquito netting covered the tops and sides of our beds. You can see it in the above photo. It was a challenge to sleep in such heat without a fan or air conditioning. The huts are “open air” things where you can look out at the jungle. Several times during the night bats would fly through the cabin — I could hear the distinctive fut fut fut of their wings.

That white rectangle at the top of the (poor) photo is the opening to the forest. This “room” is the toilet. I wasn’t able to adjust to the lack of privacy. A single board, like a piece of plywood, divided you from the others.

Because the plumbing in the jungle is minimal, the used toilet paper couldn’t be flushed and had to be placed into a bin beside the toilet. I had heard this was the norm in certain areas of the world, but this was my first time to experience it. It’s hard to shake off the feeling: this is wrong.

Also:  this is icky.

It rained several times while we were there, a common occurrence this time of year.

But when the weather wouldn’t cooperate, we simply donned our ponchos and hit the river. Unfortunately, the rain made my hairdo impossible to manage.

Sunset on the Amazon. This photo was taken our first night, when we boated to the middle of a nearby lake for a swim.

3 thoughts on “Home Sweet Home… in the Jungle”