El Castillo was built in 1930. The architecture was inspired by the castles found in the Loire Valley of France. The castle and the elaborate gardens were bought by a wealthy Colombian businessman, Diego Ricardo Echavarria as a home for his family in 1943. He and his German wife bought art and expensive furnishings on their many trips to Europe.

Or maybe this is accurate:

a wealthy Colombian businessman married a German aristocrat who wanted a European castle, and so he bought the land and with the help of architect Nel Rodriguez built this castle for his wife.

Which story is true? Take your pick. It’s odd to find two different stories online (each one repeated more than once) that explain the existence of an unexpected landmark: a Gothic castle in the middle of a contemporary city with high-rise buildings on all sides.

While we were at the castle, I thought Story #2 was true. It wasn’t until I was writing this post that I discovered multiple stories online. If I had been aware of the discrepancy, I would have used my translation app to discover the castle’s origins.

But the rest of the story is verified: their only daughter was studying in Europe in 1967 after graduating from high school. She contracted Guillain-Barre Syndrome, a devastating immune disorder that causes paralysis. When they learned of her diagnosis, her parents left immediately for Europe to take care of her.  By the time they arrived, she was already dead.

A few years later, in 1971, Diego Ricardo Echavarria was kidnapped by the infamous drug kingpin Pablo Escobar (he was not yet head of the cartel but an assassin rising rapidly through the ranks.) This was not the first of the kidnappings of wealthy people in Medellin, and Diego had instructed his wife that if he was kidnapped, she was not to pay the ransom.

Forty days later — and frustrated by the wife’s refusal to pay — her husband was murdered by the cartel. His badly damaged limousine was discovered several weeks later.

His wife returned to Europe permanently, and left the house exactly as it was — with all the furnishings, their clothing, their dishes, their artwork. The house and grounds were donated to the City of Medellin to “encourage cultural exchange.”

It has been open to the public since then, with daily tours. A descendant of the husband is the current Director. The facility offers classes in weaving and embroidery, and training programs in music and dance.

In one of the bedrooms, there’s a wonderful photograph of the castle taken from a helicopter in 1953. There isn’t another building in sight.

The tour is in Spanish, so Bill and I looked blankly at the guide, a girl of maybe 21 years old. She never asked for questions, and the tour lasted about 20 minutes. No photographs are allowed inside the house. I didn’t know this until I snapped the photo below. 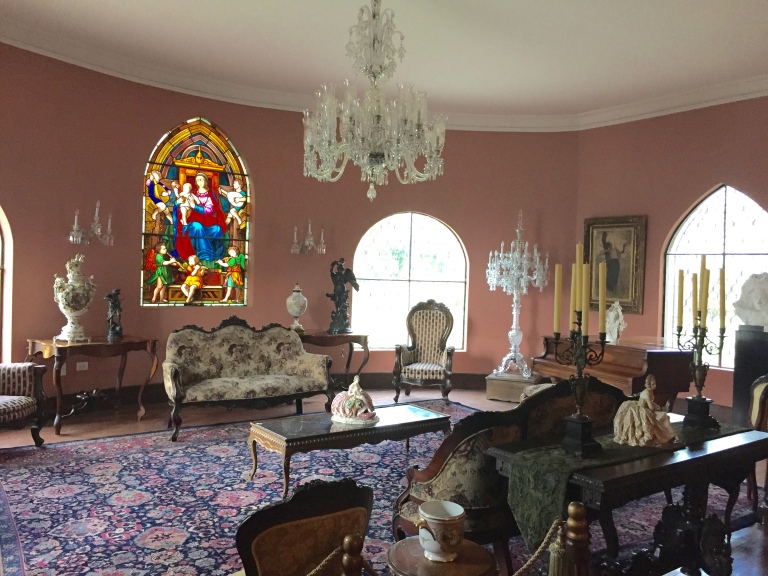 One of the docents tapped me on the shoulder, pointed to my camera and gave me a no-no finger wag. But I was allowed to take photographs (from inside the house) looking out toward the gardens. 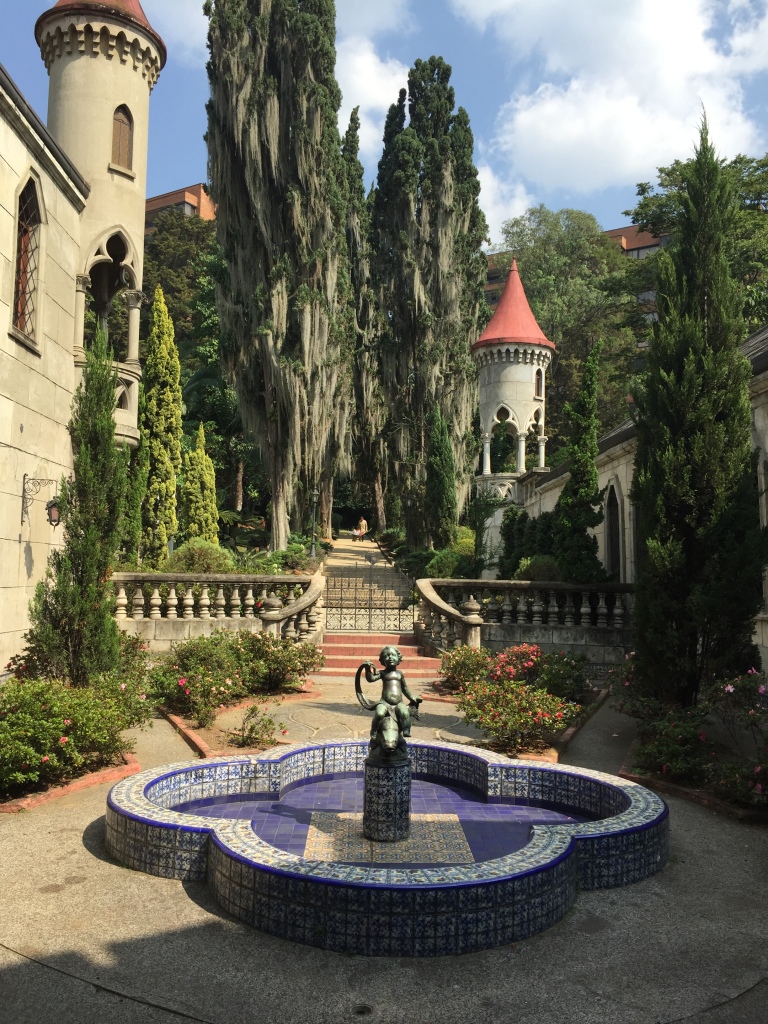 After the tour was over, Bill and I walked the manicured grounds.

We sat for about an hour at a table underneath a huge tree and enjoyed the incredible “Eternal Spring” weather of Medellin. Because of its proximity to the Equator, the temperatures remain in a narrow band all year long. The average is 72°F.

After we left the castle, we had trouble finding a cab that wasn’t already taken — the castle is located on a busy thoroughfare. We continued walking to find a better spot for hailing cabs. Despite the mild temperatures, we were soon sweating from exertion and the intense sun.

We stumbled across the Centro Commercial Santa Fe, one of the largest shopping malls in Medellin and decided to go inside.

This is what we saw:

Christmas trees everywhere. Lighted tinsel hung from the ceiling. Santa’s workshop. Holiday garlands. People wrapped up like it was the dead of winter and ice skating.

We watched them a while then rode the escalators up two floors and bought cups of gelato — pistachio for Bill, chocolate-almond for me.

One thought on “Medellin’s Castle: A Tragic Story”