The first time I took a cab was in Dallas in the early 1980s — I was 23 years old. I had had a bad car accident and my 1974 Datsun was totaled. For about two months I used the bus or grabbed cabs to get around (but I could rarely afford a cab.) I can’t remember anything about that first time; it was uneventful.

But I vividly remember my first cab ride in New York City. It’s burned into my psyche like a childhood trauma. The driver had a very thick accent and I wasn’t sure he had understood where I needed to go. But then he nodded his turbaned head and we blasted off into the Manhattan streets.

He honked when a vehicle stopped in front of us, honked to veer into the next lane, honked to say hello to a fellow cabby he liked (honk! honk! he smiled and waved.) He honked and shook his fist at the cabbies he knew and hated. He darted through traffic; cut off other drivers; changed lanes without signaling; sped up until the nose of his cab was nearly pressed against the bumper of the car in front of us.

I was seated behind him and leaning forward like a backseat driver. I remember… flinching a lot. Finally, I decided to Let Go and Let God, as they say in AA. I would either make it to my destination, or I’d die getting there.

But now that I’ve taken multiple cabs in Medellin… they’re more hair-raising that any NYC cab ride I’ve taken over the years.

Every Medellin cab is tiny — an economy car or compact Fiat — and painted bright canary yellow. They’re everywhere, as many as a dozen on any small stretch of road. Unlike in NY where I needed to yell to get a cab driver’s attention, here I simply walk to the curb and touch the brim of my cap. The cabbies flash their lights to acknowledge me; I take the first one that flies into the empty spot at my feet.

I have a rather crumpled sheet of paper where I’ve printed out the address of the apartment in Spanish, and I show it to them. When I’m going somewhere, I translate the name and address online then copy it into my phone and show them the screen. Gracias, I say. They speak to me in Spanish. I sigh: No hablo español.

You know that feeling when you’re on a roller-coaster and it tops the first huge hill and you’re about to fly straight down and you feel a sudden lightness in the back of your neck and your stomach lurches?

I’ve had those feelings, on average, a half dozen times per cab ride. I wish I was exaggerating, but it’s the truth.

The first cab took me from the airport (located in Rio Negro, about 40 miles away from Medellin) to the apartment.

The roads in Medellin are two lane; it’s hilly and gorgeous terrain. But as we were going uphill the cabdriver passed the car in front of us (there was no shoulder.) He straddled the white line — a car was coming toward us from the other direction. The car we were passing slowed down a little, and the oncoming car slowed ever so slightly then the cabby gunned the motor as we squeezed back into our lane. I expected to hear the sound of grinding metal but we missed the cars by an inch. My shoulders were drawn up to my ears.

During that initial 45 minute drive, we passed multiple cars (in one lane!) Not a single one of them honked — not the car we were passing nor the car in the lane bearing down on us. I realized This Is The Way It’s Done…  but those fluttery feelings in my stomach and neck aren’t voluntary; I couldn’t simply turn them off.  So I sat back in my seat and looked at my watch. I pecked at my phone. I counted the knuckles of each hand… anything to keep my eyes off the road.

I can’t say their erratic driving was a complete surprise. I had been warned about Colombian cabs. But I never expected that long ago cab ride in NYC would ever be eclipsed by something more harrowing.

But there are no alternatives. The metro is too far away from the apartment. The city is too spread out to walk to the places I want to see. The options: take a cab or… take a cab.

The cab ride a few hours ago was the most intense yet because we were driving out of the traffic-infested downtown. (I visited the Museum of Antioquia. More about that in another post, once I can gather my thoughts about seeing so many of the works — sculptures and paintings — of the premier Colombian artist Fernando Botero.)

The streets are packed with vehicles and thousands of motorcycles. Drivers squeeze through any opening they can find — or create — by nosing into tiny vacant spots. I could reach out the opened window and touch the other cars or the legs of the motorcyclists. Intermittently there are delivery trucks stopped in the street that require traffic to work its way around them. Pedestrians run between the cars to get from one side of the street to the other. And yet the cabby keeps driving, twisting and turning, up one lane then down the next. It’s a miracle of timing and focus…

Or sheer madness. Take your pick.

When the lights turn red and the traffic is stopped, there’s a frenzy of activity: men with huge trays of fruit juice or salted mango or wallet-sized bags of water move swiftly between the cars, yelling out their wares. Young men drop laminated leaflets through the opened windows of the passenger side of the cabs (they’re advertising fighting matches in nearby arenas) then just as quickly they trot back, reach in the window to retrieve the leaflets then leap to the median as the lights turn green. Hawkers sell potted ferns, children’s toys, colorfully-arranged sugar candy… and cowboy hats! They wear them — stacked one on top of another — a foot high.

At one stop (and mind you, this was not a touristy area) a couple of guys dressed in identical magenta shirts hopped into the street and danced — in unison — while beat-boxing with their mouths as rhythmic accompaniment. When the light turned green, they ran through the cars, looking for tips.

Hundreds of people are standing — or walking —  on the sidewalks. These groupings below aren’t people waiting in a line… 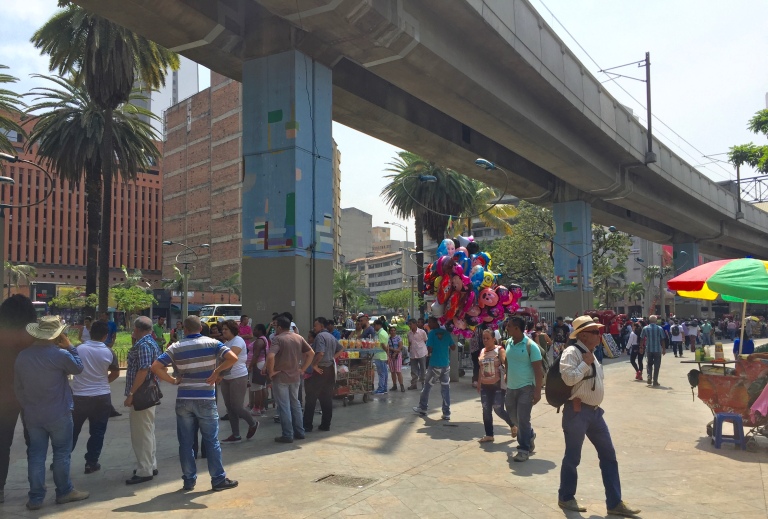 Downtown neighborhoods are clustered by what’s sold there: one four-block stretch was the textile district. Tiny storefronts without doors display thousands of bolts of fabric, stacked to the ceiling.

Another area seemed to be the mechanics district (though I’ve never heard of such a thing.) The storefronts sell car parts, plumbing pipe, electrical materials. One store had a display about 20’ X 20’ with every type of PVC connector you could imagine glued to it: C joints, elbow joints, U joints, short ones, lengthy ones, thick and thin…

One positive thing about the cabs: they’re inexpensive. The ride from the apartment to downtown takes about 35 minutes — it’s on the other side of the city. The fare came to 12,400 pesos, about $3.75 (there’s no tipping of cab drivers here.)

As a comparison, a 30 minute cab ride in San Francisco would run about $65, not including tip.

5 thoughts on “Tossed in a Sea of Yellow Cabs: Medellin vs. New York”